Here is a recent picture of my BITX40v3. I have added a top and sides to the plastic case, the top and sides hinge up as a single unit out of the way so I can access the circuit boards easier. 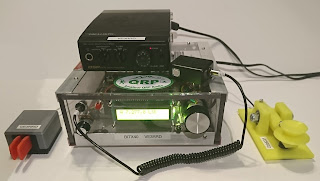 The unit on top is a Radio Shack Realistic DSP-40 which greatly improves the receiver audio. Also shown are a 3D printed straight key and paddles. The black button beside the tuning knob is the fine tune which allows me to use one hand for tuning (hold the button in with my thumb while turning the knob with my fingers - gives 1 Hz tuning resolution). Using a 10-turn pot is a must.
I have added a stereo jack to the "microphone" box and now use a coiled stereo patch cord I found at a Dollarama.
I will still need to figure out where to install the two CW touch-paddles on the front panel for the latest sketch (v1.26 at this time). I also need to add an audio AGC circuit yet, although the DSP-40 does help somewhat.
One thing I have found is that its important to make the removal of the circuit board easy, as its always coming out for more mods to be soldered on.  AL - VE3RRD
Posted by Wireless Amateur Experimenter Group at 10:41 AM No comments:

RST report with no S-meter

Some hams have difficulty giving an RST report (or RS report for SSB) when they are using a rig with no S-meter. The S-meter is useful for giving a comparative reading between the noise floor (RF level when the station you are trying to hear is not transmitting), and the signal strength of the station you are attempting to hear. If the S-meter were properly calibrated (which it usually isn't), then each S-unit change would indicate a 6db change in signal strength. This is why you must quadruple your TX power if you want the other station to hear you 1 S-unit stronger. So if you are transmitting at 5W output power, then increasing to 20W would get you 1 S-unit, and 80W would get you 2 S-units stronger. This is one reason why it is best to improve your antenna system rather than increase your TX power a few watts.
However the S-meter should not be used to create an RS/RST report, as Readability/Strength is a "subjective" report based on how you "hear" the other station.

A 5/9 report indicates the other station is perfectly readable and is very strong. But lets take a couple of examples:
If RF conditions are very favorable with the noise floor showing an S0 on an S-meter, and the signal you are copying is an S2 to S3 on the S-meter; then he could be given a report of 5/8 or even 5/9 since his signal is very strong compared to the noise floor.
On the other hand, if the noise floor were an S8 or higher on an S-meter and the signal you are copying is an S9; then his report might be a 4/4 since he is not much above the noise floor. Static bursts might prevent you from hearing every word which could result in you giving a 3/3 or 3/4 report.
You should keep a copy of the RS or RST report chart near your rig so you can give valid reports to the other station - of course in a contest, everyone is a 5/9 no matter how many repeats are needed to get his info correctly !?!
Posted by Wireless Amateur Experimenter Group at 11:26 AM No comments:

Article at http://wp.rac.ca/a-whisper-for-canada-c3/ . A WSPR beacon on the research vessel Polar Prince using callsign CG3EXP will be transmitting on 20, 30 and 40m during its 150 day journey through the north-west passage.
You can follow its voyage on the map at http://www.qrp-labs.com/c3.html . A Canada C3 Expedition Award program offers certificates to those copying the WSPR beacon at the ship's various stopping points along the way. See http://wp.rac.ca/operating/rac-awards/canada-c3-expedition-award/  for details.
Posted by Wireless Amateur Experimenter Group at 10:08 PM No comments:

The BITX map problem has been solved! You can now add yourself to the map again, or send an email as before. There is a second new shorter link: BITXmap.com
To add yourself to the map, enter your address in the search box and then click "add to map" in the small info box that appears. Next click on "edit" (looks like a pencil) at the bottom of the info box, and change the top line (with your address) to your call sign. You can also enter other info such as antenna type, power out etc in the box below your call. Then click the "save" button.
Posted by Wireless Amateur Experimenter Group at 9:55 PM No comments:

BITX40 users are meeting every Sunday evening at 7pm (your local time) on 7.277 MHz in North America and on 7.178 MHz elsewhere. To listen for stations in the time zone on either side of you, monitor at 6pm and 8pm (your local time).
Also check http://www.qrpspots.com/  for BITX40 QSO announcements.
Posted by Wireless Amateur Experimenter Group at 10:31 PM No comments:

A map of BITX users throughout the world can be viewed at http://bitxmap.com/ . This map is currently locked. To get added, please send your call and address to VE3RRD @ gmail DOT com or to KD9CYF @ gmail DOT com . You can also include other info such as power output and type of antenna if you wish it to be displayed. 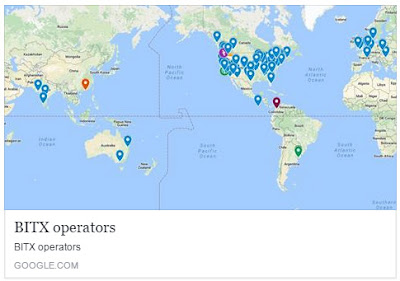 Posted by Wireless Amateur Experimenter Group at 10:21 PM No comments: 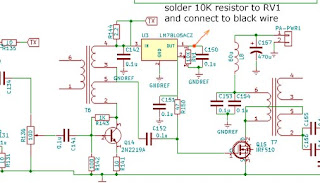 The 10K resistor and wire can be soldered to the bottom of the BITX40 board to keep it out of the way. I used a small connector in the black wire leading to the Raduino to make it easy to remove the circuit board for further modifications. Some hot melt glue will keep the wire from moving around and breaking off the resistor lead from too much flexing. 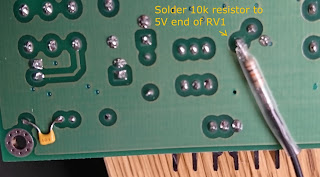 When the BITX40v3 is using the Raduino, the two capacitors C91 and C92 should be removed from the circuit board. These capacitors attenuate the signal coming from the Raduino which is not as big a problem on LSB (injected RF around 5 MHz or less), but is more of a problem on USB (injected RF around 19 MHz). In the newer Raduino sketches (such as v1.0.9 or higher) the drive level for LSB and USB can be set in the software. 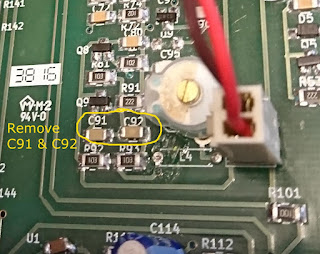 The above picture shows an older BITX40v3 board where L4 had to be removed; on the newer boards, both L4 and the variable cap above it are not installed.
The wires from the Raduino to the connector shown above, should be kept as short as possible and routed in an arc up away from the circuit board. Even better is to replace the two wires with mini coax such as RG174. This will minimize the Raduino signal that could enter the circuit and cause other problems such as the harmonic mixing that causes a "birdie" on 7199 KHz.
I can still hear the birdie on 7199 on my BITX40, but it is quite low and doesn't interfere with signals on or near that frequency.  73,  AL - VE3RRD
Posted by Wireless Amateur Experimenter Group at 1:43 PM 2 comments:

The latest v1.07 Raduino software can be downloaded from https://github.com/amunters/bitx40 , and the user instructions are found at https://github.com/amunters/bitx40/blob/master/operating%20instructions  .
This new version adds upper sideband so that now the BITX40 can be used for digital modes on 40m. Note that you must use the si5351 v2.0.1 library with the Arduino IDE for it to compile. You must also add a "Function" pushbutton to access all of the new features, which are listed as:

Added functionality via the Function Button
Here is a picture of my BITX40 receiving JT65 on 7076 KHz. The USB bandwidth is a little narrow to receive the entire JT65 band, but by tuning up 1 or 2 KHz, it can be covered. I haven't gotten the transmit working yet.  73, AL - VE3RRD 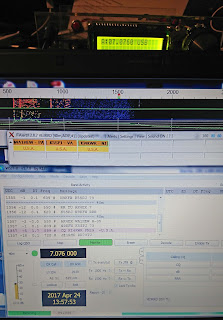 Here is a picture of the BITX40 receiving WSPR on 7038.6 KHz USB. I am using the software WSJT-X for both modes. 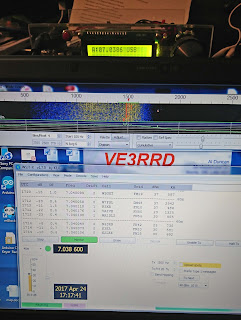 Posted by Wireless Amateur Experimenter Group at 11:20 AM 1 comment:

The two mods that everyone should be adding as soon as they get their BITX40v3 are the Q13 protection diodes at K1 and the 2nd harmonic reduction mod (100 pF NPo 100V capacitor across L7 in the output filter).

The Q13 protection mod is extremely important as there have been hams who have blown Q13 within hours (or even minutes) of getting their new BITX40v3 working and hooked up to an antenna. The cause is because they transmitted on a nearby antenna with their 100W or higher station rig while the BITX40 was receiving on its antenna.

The symptom of a damaged Q13 is that receive still works fine but there is no transmit. Note that although Q13 is a driver for the transmitter circuit, its base is connected to the antenna during receive. 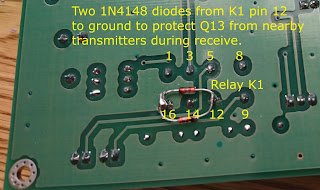 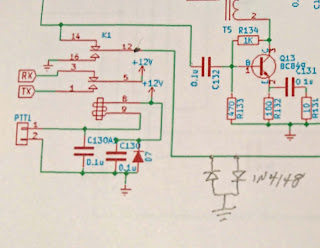 The 2nd harmonic is a little too high for North American standards. Add a 100 pF 100V NP0 capacitor across L7 in the output filter. This will reduce the 2nd harmonic by about 20 dB. If you are planning on increasing the output power above the normal 5 to 7W, then you should use a 200V capacitor. 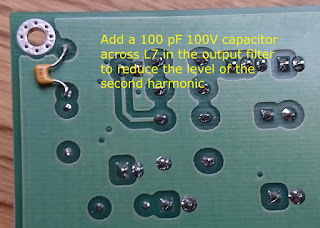 The above two suggestions are not mine, but came from others working to improve the BITX40v3 design.  AL - VE3RRD